Carbon Neutral Indiana is a project of the Indiana Forest Alliance, a 501c3 non-profit organization.

We're taking responsibility for Indiana and ensuring it becomes carbon neutral as soon as possible. We're starting with households, businesses, and academic institutions. 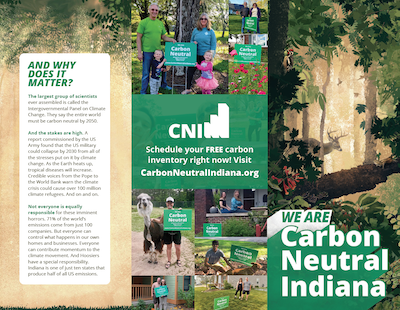 What is Carbon Neutrality?

Every individual and organization has a carbon footprint. This is the amount of greenhouse gases (GHGs) they release annually.

Carbon neutrality means being net-zero. You still emit some GHGs, but you invest in projects which soak up the same amount you emit. For example, planting trees or capturing methane generated in landfills. Being carbon neutral means taking responsibility for our carbon footprints.

Why Does Carbon Neutrality Matter?

The largest group of scientists ever assembled in human history is called the Intergovernmental Panel on Climate Change (IPCC). They say the entire world must be carbon neutral by 2050.

And the stakes are high.

A report commissioned by the US Army found that the US military could collapse by 2030 from all of the stresses put on it by climate change. As the Earth heats up, tropical diseases will increase. Credible voices from the Pope to the World Bank warn the climate crisis could cause over 100 million climate refugees. And on and on.

Not everyone is equally responsible for these imminent horrors. 71% of the world’s emissions come from just 100 companies. The world’s richest 10% produce 50% of all global emissions. Still, we as individuals can clean up our side of the street.

What is Carbon Neutral Indiana (CNI)?

CNI is a project of the Indiana Forest Alliance, a 501c3 non-profit organization. We are a team of 100% volunteers.

Our mission is for Indiana to become carbon neutral as soon as possible. We’re starting with households, businesses, and academic institutions.

What Does CNI Do?

(1) Measure your carbon footprint. This takes about thirty minutes over the phone. We use a carbon calculator developed by scientists at UC Berkeley. Schedule now as a household or as a business.

(2) Offset your carbon footprints. This is a monthly investment in projects which soak up as much carbon as you emit. Currently we support a forestry project in Alaska. Soon we’ll develop our forest projects in Indiana. The monthly investment is similar to your water bill. For businesses, it’s about 0.2 - 0.5% of total revenue.

Six months later we remeasure your carbon footprints again. This provides support and accountability -- ultimately reducing your footprint and the amount of carbon offsets you need to be carbon neutral.

“If we don’t deal with climate change, no other issue is going to matter. [My carbon inventory] was administered well. There was no judgment from the organization and it was enlightening." —Anne Laker

"China and the US are together responsible for 40% of all global CO2 emissions. At the same time, hundreds of activists have been murdered in the Philippines, Columbia, India, Brazil, and Guatemala for trying to protect their land and water. The very least I can do to honor these activists’ efforts and sacrifices is to become carbon neutral. I encourage others to take the carbon survey and contribute to global efforts to avert climate catastrophe." —Professor Purnima Bose