Each carbon offset has a unique serial number. That way, it can only be claimed by one person or organization against their carbon footprint. When they want to claim it, they "retire" it in a public database.

We purchased three more batches of offsets, and they were tired today. 752 tons total from the Afognak Forest Carbon Project. You can find links to the public retirement records on our financial transparency page.

Vicki Bohlsen created the first registered B Corp in Indiana. Now she made her company, Bohlsen Group, carbon neutral too. She's only the second person in Indiana to make both her business, and her personal household, carbon neutral:

"Despite 2020 being a tough year, that resulted in the most change the company has ever seen, we have remained committed to being a socially responsible company that puts the importance of people and the planet alongside the need for profitability...

I was surprised by just how small of a monthly commitment it would be to offset [our team's carbon footprints] while working from home! Daniel had told me it would be equivalent to “a monthly Netflix payment” per person… and he was right...

I hope that other households and companies will consider following suit."

Read more of her story here.

by Daniel Poynter
1508sc
on January 05, 2021
Carbon Neutral Indiana is igniting a leadership movement and reinvigorating public service. So how do we weave bonds of friendship during covid? When we're all isolated behind screens?
I asked Josh Bach, the first carbon neutral household in Indiana. He said, "What if volunteers delivered yard signs in person, rather than mailing them through the mail? That way everyone could be introduced to the community with at least one smiling hello. It could help us nurture friendships."
I've already been delivering yard signs in person -- if the person lives in Indianapolis. Here is Matt Rush, his wife Rusana, and their dog Pierogi, a young golden retriever who likes squirrels. My wife Cait and I dropped off their yard sign today.
But what about people who live outside Indianapolis? I've been mailing their yard signs.
Well, as of today, we have a new class of volunteer -- "Yard Sign Ambassador." Tom Bogenschutz is the first in the state, in Evansville, and Barbara Backler is the second, in Bloomington.
Whenever anyone in Evansville, Bloomington, or Indianapolis gets a yard sign, Tom, Barbara, or I will deliver in person, to their door, and welcome them.
Eventually (hopefully soon!) we can have outdoor potlucks in any city with more than few carbon neutral folks. 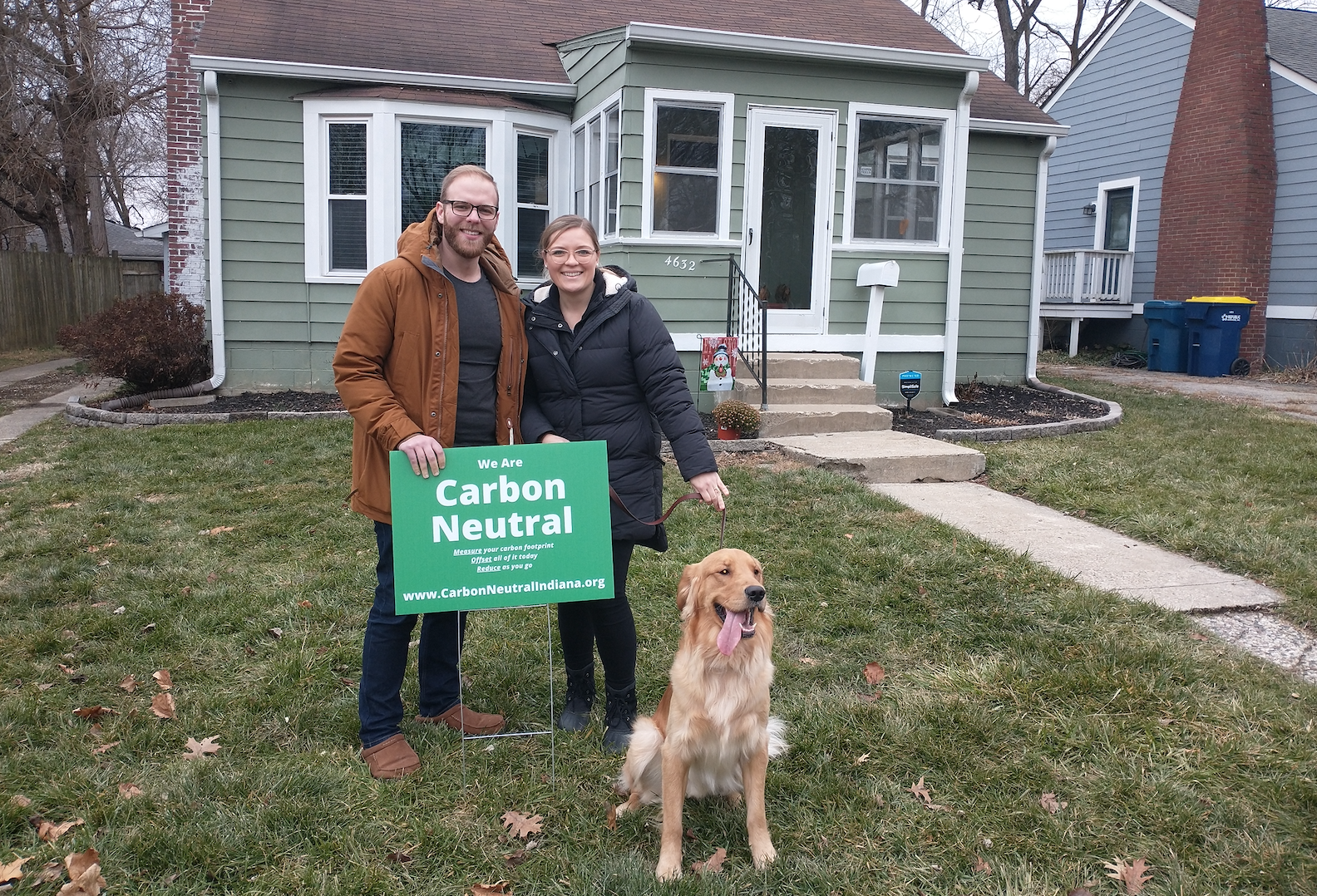 Diocese of Evansville - A Team Effort of Love

The following was written by Deacon Tom Cervone, PhD, Sister Maureen Houlihan, DC, and Nichole Cervone-Gish, ED MS. It was published in The Message, the newspaper for Southwester Indiana's Catholic Community. They are encouraging their community to measure their carbon footprints, and become carbon neutral, through Carbon Neutral Indiana.

"Editor’s note: This series takes a deeper look at Pope Francis’ 2015 encyclical on the care for our common home, “Laudato si.’”

Did you know that in 1970, President Richard Nixon signed the National Environmental Policy Act, which required some federal agencies to take part in certain regulations, policies, projects, licensing and permitting? The NEPA has been a blessing for 50 years because it requires projects to realize their impacts on the environment and be held accountable. It was developed to avoid, minimize and mitigate/lessen our impacts upon Earth’s air, water and soil.

We founded CNI in April, 2020, but it grew out of over a year of full time research, hundreds of interviews with people working on climate throughout Indiana, and a massive group chat with 50+ friends.

Nancy Moldenhauer & Anna Livesay contributed a gift of $1,000 to Carbon Neutral Indiana. Learn what Nancy thinks about carbon neutrality as well as her inspiring work with the Michigan City Sustainability Commission. 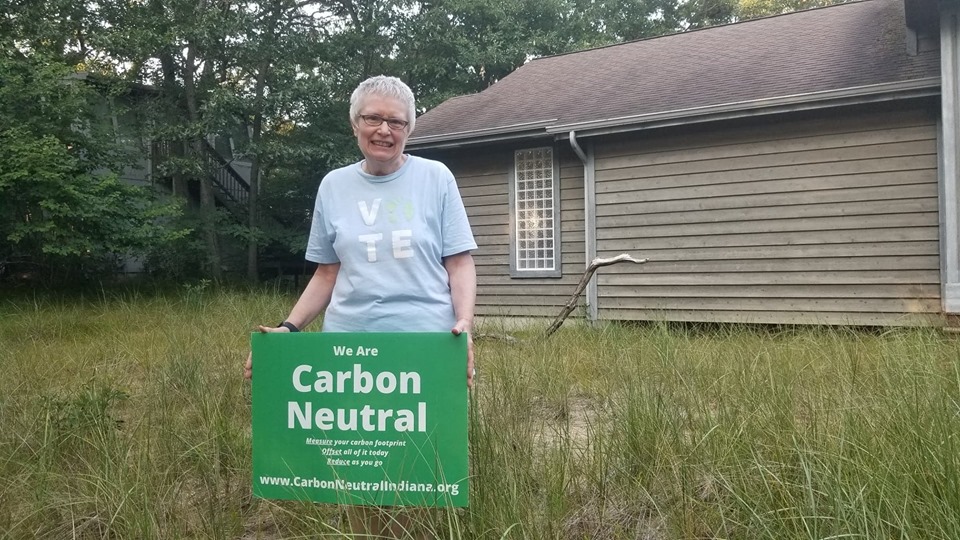 Climate Xchange is a 501c3 that provides "research, education, and advocacy to move us towards a low-carbon economy through market-based mechanisms." They host a monthly meeting where representatives from the states provide updates.

Daniel Poynter of Carbon Neutral Indiana provided an update for Indiana at 1:05:20:

BRICS is a beloved ice cream store in Indianapolis, Indiana. David and Nonie Vonnegut-Gabovitch explain why they started it, why they care about environmental sustainability, and why they became carbon neutral through Carbon Neutral Indiana.

Learn more about BRICS and their journey to become carbon neutral. Measure your business's carbon footprint.

CNI grew out of 200+ interviews with people working on climate throughout Indiana. A few months before we created CNI, several of us got together for a dinner of lentils and (a lot of) mead and wine. Here, professional magician David Ranalli delights Jacob Gambino with some sleight of hand.

These were the days before COVID. Alas! 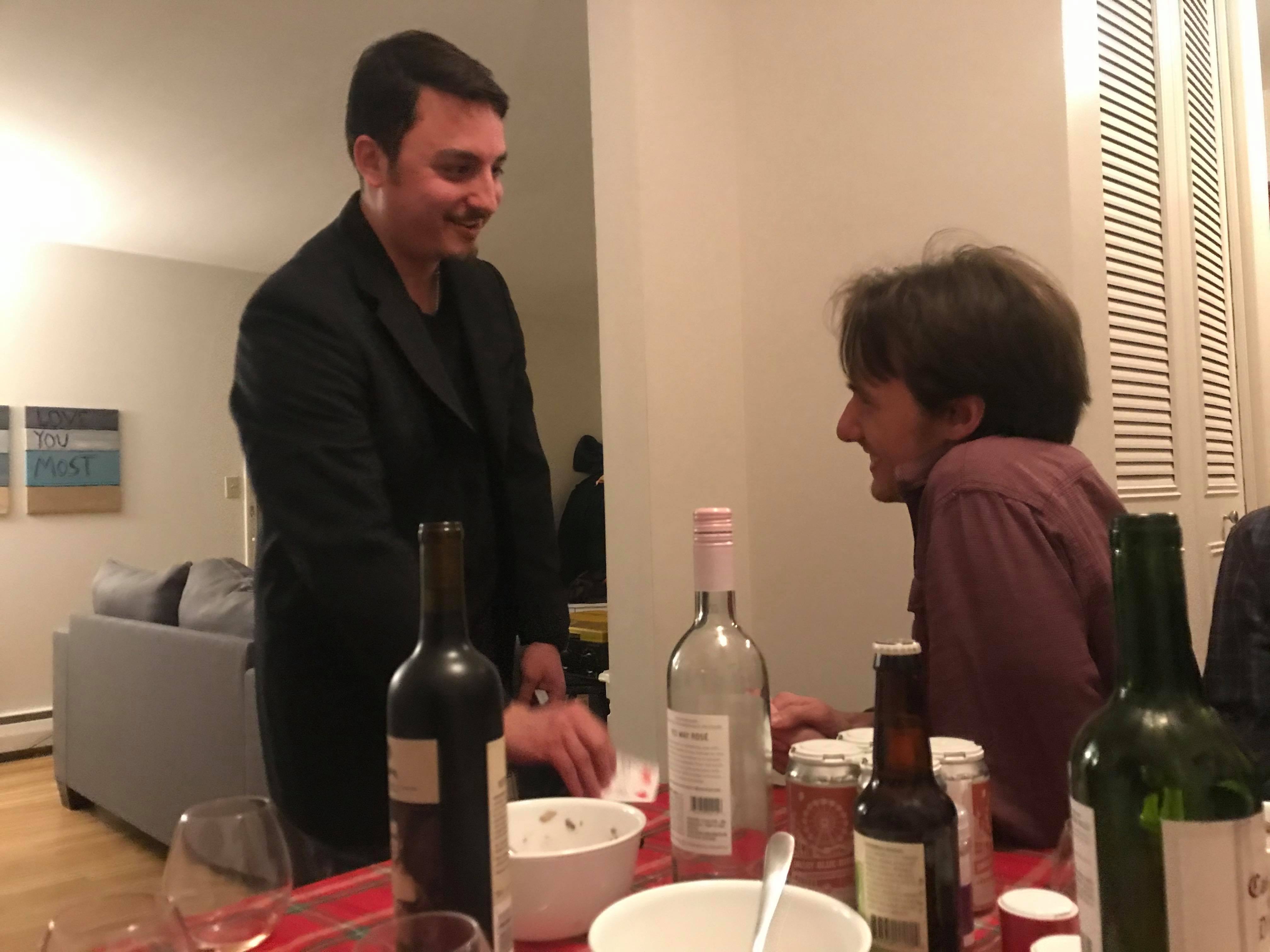