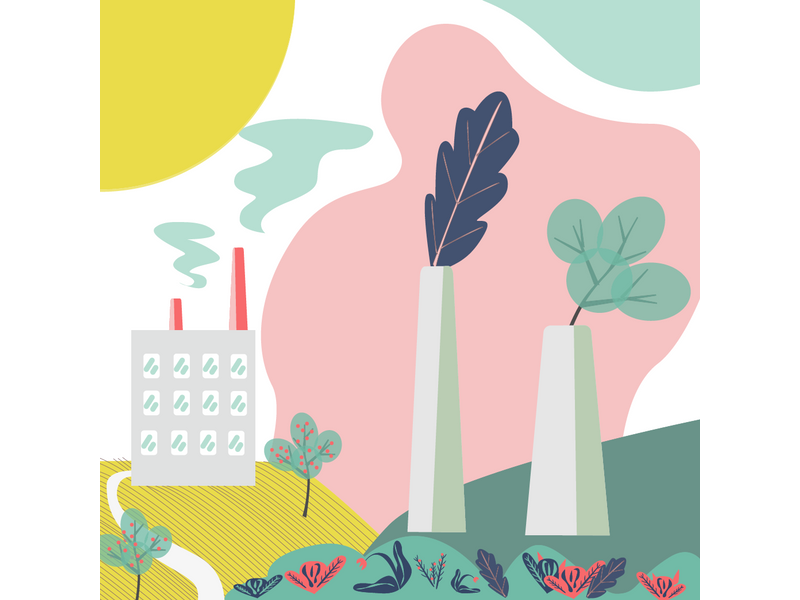 Carbon Neutral Indiana (CNI) is a non-profit organization that helps households, businesses, and academic institutions in Indiana to measure, offset, and reduce their carbon footprint. CNI was established in April 2020, and has already helped over 30 households and three businesses become certified carbon neutral.

The Intergovernmental Panel on Climate Change (IPCC) is the largest assembly of scientists in human history. They declared that in order to prevent temperatures from rising above 2ºC, the world must become carbon neutral by 2050. But what does carbon neutral mean? Why is it important? And how can I help?

What Does Carbon Neutral Mean?

Much of what we do adds carbon to our atmosphere. This includes shipping our food, fueling our vehicles, heating and cooling our homes, and even creating the goods and services we purchase. Carbon neutrality means that individuals, businesses, and institutions are taking responsibility for their carbon footprints. They invest in projects, like planting forests, that remove as much carbon dioxide from the atmosphere as they put into it.

For example, an individual can start driving an electric car to eliminate their transportation emissions, but they may still have to rely on fossil fuels for their electricity. Therefore, they also fund projects that remove carbon from the atmosphere by purchasing carbon offsets.

Why Is Carbon Neutrality Important?

Scientists agree our carbon emitting activities are causing the climate crisis. The climate crisis doesn’t just damage our environment, but it damages us as well. As the Earth gets hotter, more people will experience heat-related and cardiovascular illnesses, the amount of climate refugees will increase, the military will suffer, health care costs will increase, crop yields will decrease, and on and on.

National and state governments are not doing enough to prevent this catastrophe. Individuals must lead the way. When an individual, business, or institution becomes carbon neutral, they are going above and beyond to take both personal responsibility for their carbon emissions and social responsibility for protecting the health of both the planet and other people.

How Can I Be Carbon Neutral?

Carbon Neutral Indiana helps you do just that! We help individuals achieve carbon neutrality for their home, business, or institution by scheduling a meeting where they answer some specific questions that are used to measure how much carbon they emit into the atmosphere.

We use the University of California, Berkeley’s CoolClimate calculator, which calculates the carbon emissions from transportation, energy, food, goods and services purchased by households and businesses.

The initial carbon emissions measurement is free, and afterwards we offer the home, business, or institution owner the option to pay a monthly fee ($15 per carbon ton emitted) to offset their emissions. The funds received from the monthly payments go towards purchasing offsets from the Afognak Forest Carbon Project, which is an improved forest management project that protects forestland on Afognak Island in Alaska. In the future, we plan to establish a forestry offset project in Indiana, where forest landowners are encouraged to preserve their forest trees (instead of logging or burning them) by providing the landowners with funds from carbon offset purchases.

We then offer practical methods for households, businesses, and academic institutions to reduce their overall carbon footprint, and consequently pay a lower monthly fee.

Carbon Neutral Indiana is igniting a leadership movement and re-invigorating public service. Along the way, we’re taking responsibility that Indiana become carbon neutral as soon as possible. Besides reducing Indiana’s overall carbon footprint and working to create a voluntary offset market, we educate Hoosiers on carbon neutrality and alleviate their concerns about the changing climate by providing them with an accessible way to engage in climate action.

One carbon neutral household owner, Sam Bryan, stated, “After becoming carbon neutral I feel a lot better. I’m working something into my daily lifestyle that helps take care of at least my portion of the problem. This actually makes me feel proud. It’s nice to know that I’m doing my part to take care of the carbon that I emit into the atmosphere.”

Josh Bach, the first carbon neutral household in the state, said that after becoming carbon neutral, he felt a “sense of relief. I feel good that I’m doing something, and not just feeling this frustration.” By guiding Hoosiers through the process of measuring, offsetting, and reducing their carbon footprint, Carbon Neutral Indiana is able to help ease their feelings of hopelessness and frustration about the current climate crisis, by giving them the power to engage in effective climate action.

CNI is starting small but has big ambitions. Daniel Poynter, co-founder of CNI, points out, “it is not about how much power and money we do or do not have, it is about knocking over dominoes a little bit bigger than the last. It is about reminding Hoosiers that we don’t have to be passive and watch the world fall apart. Instead, each of us can take small steps— right now— and create the future we want. That is real power and will create real change.”

Sydney Johnson is one of fifteen summer interns with Carbon Neutral Indiana, a project of the Indiana Forest Alliance. Learn more at CarbonNeutralIndiana.org.