Do you know Alexandra Smith yet? You should!

Not only was she the third carbon neutral household in Indiana -- out of 200+ now -- but she's Operations Coordinator at the International Society of Sustainability Professionals (ISSP). 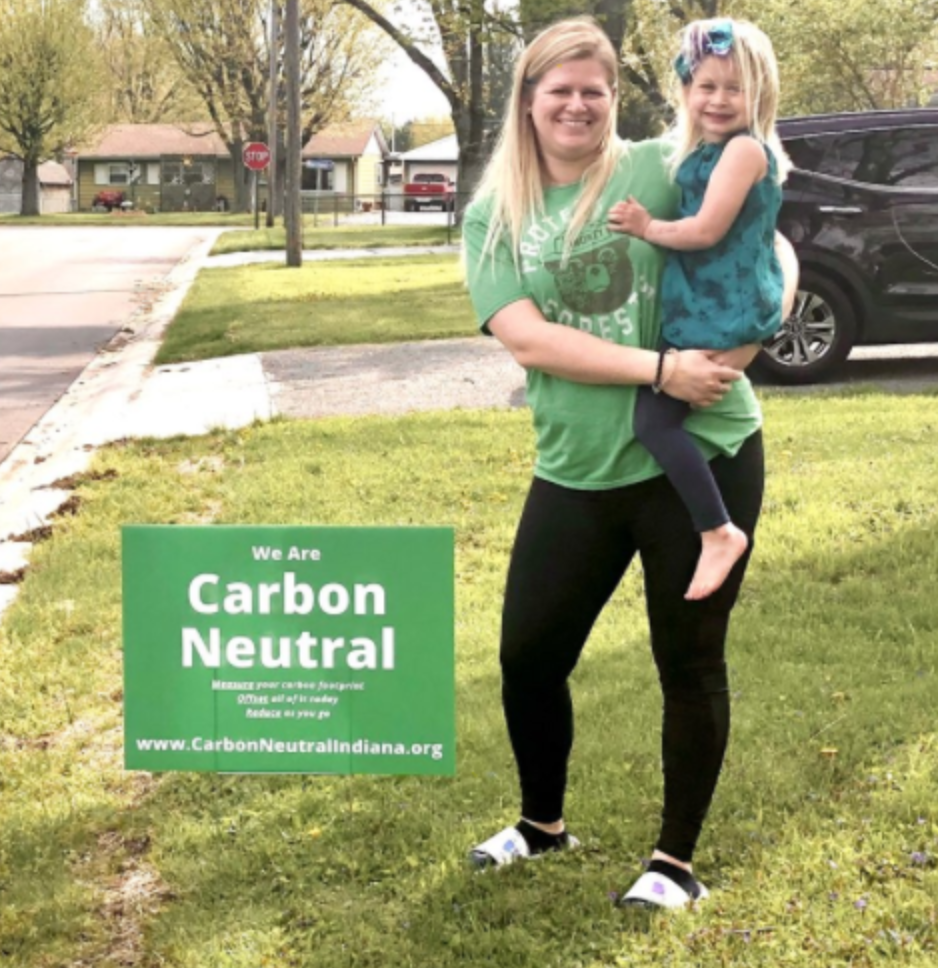 Alexandra invited me to write an article (below) and give a webinar about Carbon Neutral Indiana's strategy for their 19,000 subscribers.

Do you want your organization—a corporation, university, or city—to become carbon neutral? But does it feel overwhelming, like pushing on a mountain?

Forget the organization for now. What if instead you helped individuals in the organization become carbon neutral? When they walk the talk by internalizing a carbon price, they will become high-integrity, persuasive advocates. They will transform the organization from the inside out, like holes in swiss cheese.

“Be the change you want to see in the world.”
— Anonymous

I invested one year to interview 300 people working on the environment in the Midwest. I discovered that:

So, my friends and I got to work. We created a nonprofit and enshrined the goal within its name, Carbon Neutral Indiana.

We designed it as a social enterprise, to pay for staff with earned income. And because losing attitudes are infectious, we avoided the established environmental community. Instead, we built a new community one household at a time.

This led to an energized grassroots movement and the state’s first bipartisan climate legislation. We achieved this in a conservative state, during the pandemic, with no grant funding, and an all-volunteer team.

In a culture that felt like molasses, we’ve learned how to spark change and progress.

Second Nature tracks over 700 commitments by academic institutions to reduce carbon emissions. Over 60% either haven’t reported emissions since or increased their emissions.

Let’s use a real university near my home as an example and call it “Knowledge University.” They invested over a million dollars into sustainability staff and projects. Eight years later, their emissions increased 30%! You’ll find similar patterns in cities as well.

Why? Accountability is the root issue. This in turn has three deeper causes:

Committing to become carbon neutral in a few decades is dangerous. It gives us a false sense of accomplishment. A local seminary even gave Knowledge University an award for their commitment— but words aren’t actions.

I met with Knowledge University’s sustainability staff. To prepare for the meeting I read their 50+ page sustainability report. Then they told me, “Our predecessor created that report. It’s irrelevant. We’re taking a different approach.”

What’s the turnover rate for sustainability staff? One to three years? And what about the people around them? In a university, the students come and go like mayflies. In cities, so do the elected officials. Who sticks around, maintaining a thread of memory?

What happens if an organization doesn’t achieve its climate goals? Usually nothing. Why? Commitments usually don’t include a failure penalty.

Also, the broader community of stakeholders isn’t aware of the commitment to hold the organization accountable. Who would let them know? Newspapers laid off 51% of their employees between 2008 to 2019.

A Solution: The Swiss Cheese Approach

Many of us are idealistic. We try to change an organization in a few years. When it doesn’t work, we feel stuck, overwhelmed, and leave the organization.

What if instead you tackled a smaller challenge? Organizations are nothing but a collection of individuals. So, what if you taught those individuals:

Once successful, you can do it again and again. This will create momentum, confidence, even a sense of inevitably. Eventually you’ll transform the organization from the inside out, like holes in Swiss cheese.

Above: Some of the 200+ carbon neutral households and businesses. The community grows as friends speak with friends. See a full list or explore a visualization.

This answers the three root causes listed above:

In contrast, an individual can measure the specific amount of carbon trash they create. Then they invest financially in verified projects that reduce or sequester that exact amount. This is concrete and tangible.

What if you become carbon neutral this week? Then three to five others at your organization this month? Then 20 to 25 others this year?

Even if you leave the organization, you will leave behind people who understand this approach. These individuals will be a distributed network—like the internet, mycelium, or the blockchain—that will outlive any single individual.

Words are not action. It’s too easy for someone to put up a yard sign, signalling they’re on the righteous side of history. It’s too easy to click “Like” on social media and become a mere clicktivist.

Our carbon emissions are damaging others. This is true at any level of scale—the individual, the household, the organization. And each level can put a price on carbon by paying to be carbon neutral immediately.

“But that’s what Big Oil wants! They want to shift our attention from systems change to individual responsibility.”

This is a false dichotomy. Why can’t we do both at the same time?

In fact, by walking the talk we’ll have more integrity and be more persuasive when advocating for systems change. And recent research echoes this:

"Two studies using large, well-powered samples show that focusing attention on one’s sustainable behaviors rarely results in a decrease in support for a climate policy like a carbon tax.”

“But financing carbon reductions outside of our boundary with carbon offsets is a last resort!”

This is another false dichotomy. Why can’t we become carbon neutral immediately and reduce our direct emissions over time?

Second Nature explains it this way:

“Some institutions reverse the usual carbon management hierarchy and achieve carbon neutrality through offsetting before beginning other mitigation efforts. These institutions feel that the threat of climate change is so pressing that it is their moral responsibility to become immediately carbon neutral...

...It is important to keep in mind that the very act of offsetting puts a price on GHG emissions. This price signal can drive internal emission reductions, because every ton of carbon that is not emitted represents one less offset that needs to be purchased.”

And this is exactly what Microsoft did using an internal carbon fee to shift its culture.

So instead of trying to make your entire organization carbon neutral, what if you focus on individuals within the organization for now? You’ll build momentum and an army of internal advocates.

Here’s what to do next:

1) Forward this oage to others. Who are other change makers you know who want to transform their organizations? Corporations, universities, cities. Please forward this page before going to the next step.

2) Be the change you want to see -- make your personal life carbon neutral. It takes 15 minutes and costs about $15/person. Start process here.

3) Learn more about the voluntary carbon market. If nothing else, watch David Antonioli’s remarks before the House Agriculture Committee. Then go read Securing Climate Benefits: A Guide to Using Carbon Offsets by the GHG Management Institute and Stockholm Environment Institute. Additional resources include Second Nature’s Carbon Markets & Offsets Guidance, The Oxford Principles for Net-Zero Aligned Offsetting, and The Taskforce on Scaling the Voluntary Carbon Market.